Plenae Event: Change the relationship with your body

“When we want something to happen, time flies. Today, technology drives the world and we believe we can hack the system and control time. But we always have the same 24 hours” 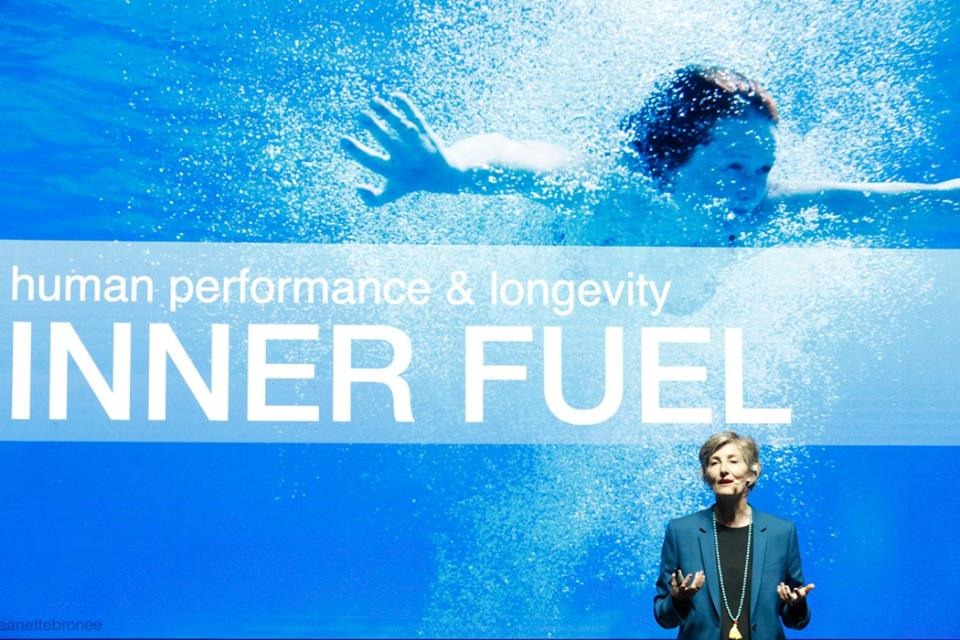 Nutritionist Jeanette Bronée entered the stage asking: “What is something that we always want more of? What is something everyone feels they don’t have enough of?”. And continued giving hints. “Something we think we control, but it controls us.” Someone in the audience shouts “money”. “Nope”, she replied. “It’s time. Time is the new currency.” For a lecture with the title “Nutrition: the key to a long and wholesome life”, her opening was quite unexpected. “When we want something to happen, time flies. Today, technology drives the world and we believe we can hack the system and control time. But we always have the same 24 hours,” said Jeanette, who then conveyed her message. “We can’t buy more time. We can however buy more personal care. And with this, spend time in a better manner.” She refers to caring about one’s own body. Those who think that choosing the right food, meditating or doing exercise is a waste of time are totally wrong. This would be the only time spent, according to her, that we recover in terms of health and well-being – and, who knows, with a longer life. Jeanette developed a method called the Path for Life, which seeks to change the way people interact with their own body. Want an example of her work? Under pressure. “The CEO of a big company looked me up. Business was prospering, but he wasn’t. He was barely surviving,” she said. “He’d spend the days stressed. He was gaining a pound a week, because he couldn’t stop eating.” The executive basically ate at his desk. He dreamed about leaving the company and retiring. But that was not an option at the time. The big mistake, according to the nutritionist’s analysis, was his insistence in putting work ahead of himself. “He thought he didn’t have time. I asked him to reconsider his priorities and limits. In my opinion, he was wasting time.” The doctors were concerned about the possibility of him having a stroke if drastic changes were not made. The fear of dying or having a devastating disease is not a motivational feeling in the long-term. “But the desire is,” said Jeanette. “Why take over control of your health? Why don’t you want to have a heart attack? Or why do you want to live a long life, full of energy? It’s like riding a bike. You’re not going to become distracted with the irregularities in the asphalt; you’re going to focus on where you want to go.” Jeanette points out that under pressure we focus on what is urgent, but not on what is important. “We are driven by instinct and not by inspiration. It’s the quality of time that makes the difference.” According to her, the key to our longevity depends on the quality of the fuel we put into our body. Just like a racing car that needs better quality fuel to have superior performance.” She pointed out that Plenae’s founder, Abilio Diniz – who was in the audience –, was healthy and felt very good at age 81. “He probably thinks that his body is a racing car and self-care is his fuel.” How to care for the body. Every day, we are bombarded with information – many times contradictory – of what is good or bad to eat. But there isn’t a formula. It’s confusing because we seek a single answer for health and longevity. But we are different individuals,” said Jeanette. “We need to become like scientists when caring for our body. Science is a process that combines phenomenon with statistics. Likewise, we can learn about our body. Observe and discover the relationship between what we eat, drink and do with the way we feel – better or worse according to our choices. The essential. To survive, man essentially needs water, food and rest. The nutritionist provides suggestions on each one of them: 1. Water. The most essential. All of our cells need water, especially with age. Dehydration causes common problems such as a lack of energy, focus, anxiety, migraine, anger and pain. Research with prisoners proves that they become less aggressive when they are more hydrated. Another study conducted with children in schools: when they drink water instead of sweetened tea or soda, work in groups is more productive. Jeanette asks everyone to chew water. “It may seem strange, but what happens when you chew is that your mouth releases saliva, which absorbs hydration more, and quickly we become alert.” 2. Food. The source of all energy. The trick is to substitute processed food and sugar for grains and fiber that provide energy for the day-to-day. Eat green and fresh vegetables for their ability to reduce inflammation. This is very important in the longevity process. Legumes, quinoa and fish optimize the metabolism of cells. Avoid eating snacks between meals and eat little. 3. Rest. Sleep seven or eight hours per day. Schedule 5-minute breaks during work every 45 minutes. Another healthy habit are naps just 10 minutes long. It will give you more energy than a cup of coffee. Click here to watch the full lecture.
20 curtiram